Twitter has acquired social broadcasting app Breaker, the companies announced via a combination of blog posts and tweets. The deal will see Breaker’s team joining Twitter to help “improve the health of the public conversation” on the service, as well as work on Twitter’s new audio-based networking project, Twitter Spaces.

The Verge reports users of Amazon Music’s website this week began seeing a price tag for listening to free podcasts. It even showed a mark-up indicating what had cost nothing was now available for $8.95.

Megaphone Is Now On Multiple Blocklists For Tracking Podcast Listeners

It appears that anti-tracking tools are blocking all podcasts hosted on Megaphone. The recently Spotify-acquired company might face some backlash for its MTM (Megaphone Targeted Marketing) service. Jack Rhysider from Dark Net Diaries breaks down why this will be problematic for podcasts hosted on the platform.

Just a week after announcing it had hired investment banker J.P. Morgan as a financial adviser, LiveXLive says it has expanded the scope to include a wider list of potential outcomes – including a sale, a merger, a strategic acquisition, or a divestiture of some of its business units.

Google Podcasts has had a long road to walk in order to compete with more fully featured podcast apps, but it's been steadily improving lately, even gaining support for adding custom RSS feeds. Now Google is bringing the web version more in line with the mobile apps by revamping the subscriptions page to show a list of your latest episodes.

The purchase will allow Hopin to provide advanced video production features to Hopin event organizers. In addition to eventually integrating its features into the Hopin platform, StreamYard will continue to also offer its live streaming studio tools to independent content creators.

The Salem Media Group, a media holding company comprising radio, book publishing, and digital media, has announced the start of a new podcast network. The focus will be conservative content across its definitional “Christian and conservative media landscape.”

This group is to help facilitate information for people to build their own studio, find one to rent, or how to go about renting their own out. It's also the place to help your clients with their Remote studios or Remote recording best practices (thanks covid).

Links and resources for users of Adobe Audition, the best audio editor and workstation on Mac and Windows.

Movo PC-M6 Podcasting Microphone Review: A Lot Of Bang For Your Buck

Movo currently offers a bundle that serves as a one-stop-shop to get everything you need to start your podcasting adventure. Bob Fekete from Ibtimes.com covers the Movo PC-M6 podcasting microphone, which comes bundled as part of the Movo Podcast Recording Kit.

Here’s Why You Should Film Your Podcast

Podcasting might be an audio medium, but many podcasters are now live streaming and filming their sessions. If you’re just getting started with a podcast – or looking to upgrade an existing podcast with video then check out this article on the best podcast cameras to use.

Seattle indie rocker and podcaster John Roderick has apologized for a story he told online about making his young daughter spend six hours learning how to use a can opener.

If you're still confused about what Podcast 2.0 is then check out this insightful episode of the Podcast Business Journal Spotlight podcast with guest Dave Jones.

How's this for thinking outside the box, Vietnam’s leading one-hour-delivery e-commerce startup Loship has released its newest feature: Loship Radio.

The feature allows users to listen to podcast and audio-based content right on the Loship app, providing additional sources of entertainment and news for customers while waiting for food delivery.

Do you like jokes, adventure, killing things, and friendship? Of course you do! The Damage Guild is an actual-play Dungeons & Dragons 5E (5th Edition) podcast with a focus on collaborative storytelling, character-driven narrative, and improv comedy shenanigans.

Hospitality Mavericks is a podcast on a mission to inspire leaders and entrepreneurs in the hospitality and restaurant industry to create profitable and heart-centred businesses from the inside out; the kind that both employees and customers love and support.

If you want a laugh, while discussing life, love, the world and health. This podcast is for you. Life is an odd mix of amazing and strangeness. Well, so are we. Are you tired of people not telling it to you straight? We keep it 100% authentic. Never Ninety Nine. Dr. Odom and Olive are passionate, about helping people live their life at 100%.

Fed up of hearing about Lockdown? In need of something full of frivolity? Join Jim and Jan in their Audio Dram. Disclaimer it is set in lockdown but it's fine because these two are having a blast! 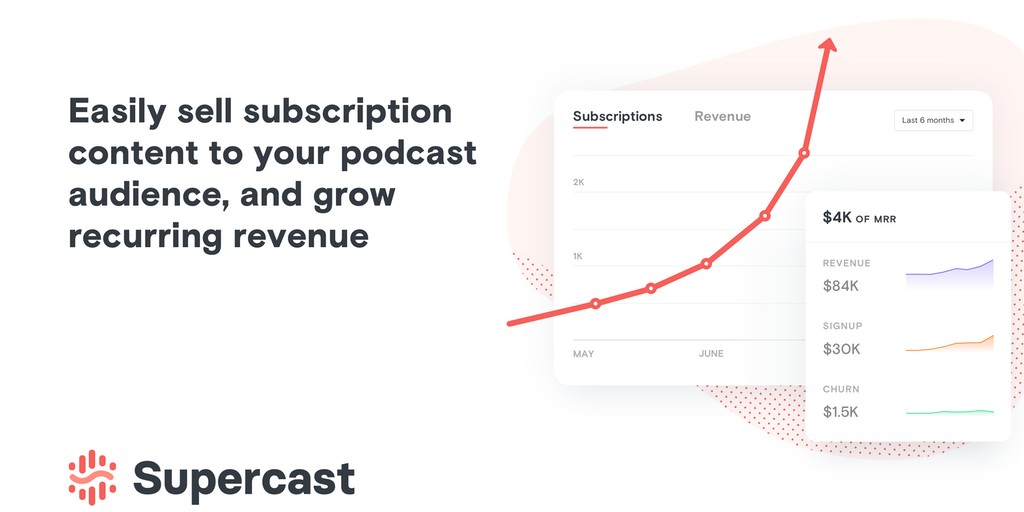 Supercast - Get Paid To Podcast

Supercast gives podcasters everything they need to sell subscription content to their listeners and build sweet, sweet recurring revenue without disrupting their ad-supported public feed.

Engage your listeners and grow your audience with audiovisuals, Catch your followers attention while a waveform that moves to your audio. Look great on screens large and small with full HD video.

Parrot lets you listen to any podcast and save clips, add comments and share them with anyone.

Legible - Sell Your Podcast As An Ebook In Hours

Legible iis the quickest, simplest way to monetize your podcast. We automate the process of converting your podcast episodes into an e-book and generating a store front for it. It is quick and easy. Sign up today to start selling!

Wavechat is like the Snapchat for voice: A micro podcasting app that allows you to creatively connect with and follow friends through podcast-like stories and private voice messages.

Podgala repurposes your podcasts into a multimedia content feast for distribution and marketing.

Easily Create A Smart Micro Landing Page For All Your Social Media Bio Links. Try Now! Drive Traffic And Retarget Your Audience With One, Impressive Link And Powerful Page. 25M+ Users. Gorgeous Pages. Showcase Everything. Easy To Use. Huge Value.

Do you have a podcast app? Are you part of a podcast startup or provide products & services related to podcasting,? reach out to [email protected] for information on our affordable sponsorship packages.

How to Maintain Your Podcast Motivation in 2021

The beginning of a new year brings with it inspiring aspirations, impressive resolutions, and a whole host of ambitious goals you want your to reach. Don't want to be a 'podfade' statistic? then check out this article from WeEditPodcast.com on how to maintain your podcast motivation for this year.

In a Few Words - Framing Your Podcast - January 12 (Virtual)

This hands-on workshop by Hindenburg will provide a framework to understand the forms and tools of podcasting to help get you started.

What do you think of this newsletter? Tell us here